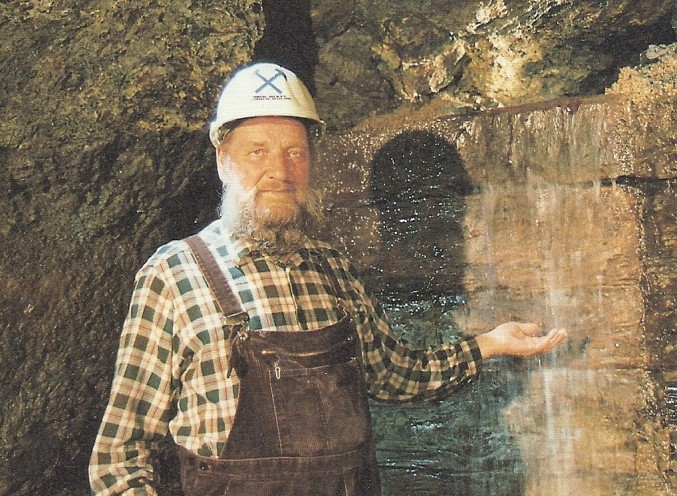 The Stephanie source originates from the shafts of the Copperplate mine.  In the early days of water revitalisation, Johann Grander got the water for his tests from a source at Pass Thurn near his hometown.  However, the water from this source couldn't be used after rainfalls, because the rainwater mixed with the source water and its properties were then changed.

When Johann Grander learned about the Stephanie spring in the old tunnels of the closed copper mine in Jochberg, he examined a sample of the water and was so enthusiastic about its goodness and quality.

His thoughts of acquiring the land with the source in order to build the new premises, but to continue the old Tyrolean mining tradition, soon became a reality.

After purchasing the land, Johann Grander refurbished the old mine, with its beginnings dating back to the 16th century, with the help of family, friends, colleagues and many volunteers.  The old mine was closed on July 31st, 1926, but festively re-opened for visitors as a historic mine on July 28th, 1990.

The Copperplate in Jochberg has survived over centuries, from the Middle Ages until today.  In the meantime, the hammers of teh miners are indeed quieter, but not yet silent.  Currently, as the only maintained copper mine in Central Europe, the Copperplate mine in Jochberg enjoys a special position.  The ore, which is now taken out only in small amounts, is considered a real treasure for the visitors and is often bought as a souvenir.

The water, which is used as the basis for all GRANDER® products, originates from the tunnels of this mine.

The water from the Stephanie spring has a special level of purity and goodness, which only very few waters have.

By clicking the button "Subscribe now" you agree to our .

Find a GRANDER distribution in your state

×
×
You would like to have the best water in your home?

Our water experts are happy to offer a free and non-binding consultation. Contact us for your customized water concept – for the highest quality of water straight from your tap in a sustainable way.