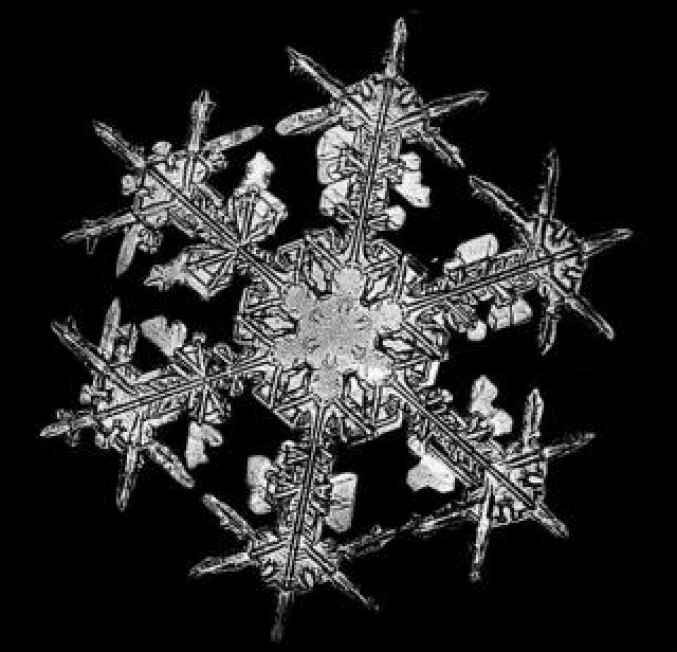 wissen.de
When thick, white flakes fall from the sky, they never fail to impress us:  young and old alike feel attracted to the white beauty.  Snow, with its countless manifestations, fascinates us again and again.  Snow, as a mixture of air, ice and water is completely normal in water.  But, the wonder of snowflakes lies in the detail...

Upon closer observation snowflakes are true works of art created by nature.

The airy clumps consist of tiny, completely symmetrical stars - each one is entirely unique, no two are identical.  Or maybe not?

In the 17th century the astronomer, Johannes Kepler, wrote, "There were individual pieces of ice, very flat, very polished and very transparent, approx. as thick as a piece of paper...perfectly 6-sided shapes.  Their 6 sides were so similar that it was impossible for a human to produce something as exact as this."

The pattern that all snow crystals have in common is their 6-sided symmetry.

Every crystal always has 6 arms or sides.  But why?  How is such precise symmetry created?

The answer lies in the processes which take place at a molecular level upon freezing: the water molecules are not flat, but rather slightly bent.  Therefore, they position themselves in ice at certain angles - one which creates the 6-sided symmetry of the crystal lattice.  However, there is something else: a tiny ice nucleus doesn't have any arms at first; it is similar to a 6-sided prism.

And this changes upon further growth: due to the symmetry of the crystal lattice, water molecules can easily accumulate on some places of the baby crystal.  It is at these spots that the crystal grows faster than at other spots - it forms gradual "edges".  Because they rise higher than the rest of the crystal's surface, more and more water molecules accumulate at this point - these edges become branches and ice needles.

Is every snow crystal really unique?

But what is the case with the apparent endless variety of snowflake designs: are there really no two ice crystals alike?  This assumption was made by farmer and hobby photographer, Wilson Bentley, some 90 years ago while he was observing and photographing under a microscope.  In 1922 he wrote, "Each snowflake has an infinite beauty that becomes even greater through the knowledge that the observer will likely never find another one that looks similar."  Bentley took at least 5,000 photos throughout his lifetime.

For many years, in large due to these photos, it was believed that no two snowflakes were identical.  Therefore, it was even more astonishing that in 1988 Nancy Knight, a scientist from the National Center for Atmospheric Research in Colorado, found 2 completely identical snow crystals.

This appears to have disspelled the belief that no two snowflakes are alike.

However, looking at it from a closer level of atoms and crystal lattices, there are still obvious differences between similar ice crystals.  Since there are tiny defects in each lattice, and the likelihood that there are the same in two ice crystals out of more than 100 million water molecules is extremely small.

By clicking the button "Subscribe now" you agree to our .

Find a GRANDER distribution in your state

×
×
You would like to have the best water in your home?

Our water experts are happy to offer a free and non-binding consultation. Contact us for your customized water concept – for the highest quality of water straight from your tap in a sustainable way.